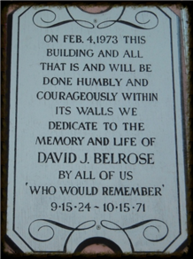 The Belrose is a non-profit California Corporation, and has been in its current location, a historical landmark, since 1962. ​ ​

The Performing Arts Center was established in 1954 by Margie and the late David Belrose offering classes in Ballet, Tap, Jazz, Ballroom, Swing, and Theater Training classes including acting and improv.  Most classes for most ages; primarily taught by Margie Belrose. ​ Click Here to read moreabout The Belrose in a featured article.

In 1996, Margie was inducted into the Marin Women's Hall of Fame as an Honoree of the Arts and in 2010 was named Marin’s citizen of the year.​

A vast assortment of quality productions have been produced over the years including: Oliver, The Wizard of Oz, Peter Pan, The Lion in Winter, just to name a few.  Many original productions have been presented over the years as well.  It was also voted Best Live Theater by The Pacific Sun.  With original and classic productions all year round, make sure to visit the "Show/Audition" Tab for current shows. ​The Costume Shop was established in 1977.  It is the most complete costume rental shop in Northern California.

We have over 3,000 adult sized costumes from almost every era.  Open year round with extended holiday hours.  It too was voted Best Costume Shop by The Pacific Sun. ​The Belrose, with over 1,000 Renaissance costumes, also provides Renaissance costume rentals for the patrons of the following Renaissance Faires and Festivals around the country: Southern and Northern California, Arizona, Colorado, Texas, Georgia, New York, and Oregon. ​